If you’re a beginning guitar player, you’ve probably heard the word “scales” before but may not be sure where to start. If you’ve tried a few, you may be wondering what the point is to this often tedious guitar playing chore. There are a few reasons why adding scales to your practice routine is super important:

As a new guitarist, it’s important to break up your practice routine to maximize your progress. You will improve leaps and bounds those first few weeks and months if you stick to this general guideline:

Playing Fun Stuff (whatever you want!)

Adding scales to your daily guitar practice routine is easy and the benefits are well worth a little time spent. Let’s get right to it!

A great place to start for beginners or anyone new to scale shapes is the good ‘ol open position. In all of the graphics below I’ve included the RED root notes as well as other neighboring scale tones for better fretboard visualization. Take a look at the notes then play the TAB or standard notation exercises underneath each chart.

Let’s start with C Major in the ‘open position’. Now lets take a look at what that looks like in standard music notation and tablature:

Notice the starting point is on the root C and continues to the octave C before descending.

When practicing scales, there are a few things to consider for both hands.

If you’re an intermediate or advanced guitarist wanting to get more into the theory of scales, more advanced shapes and how they’re constructed check out some other free lessons on Lifein12Keys.com here:

Scales and Theory for Guitar including the Circle of Keys.
Modal Scales for the Guitar
Chords 101 – Complete Guide to Guitar Chord theory

For the rest of you, let’s get to the other 9 scale shapes! The first thing you may notice is that the notes are the same as the C Major shape above. You’re right! A minor contains the same notes, however, we start on the root A.

Notice when playing a minor scale it has a slightly darker sound. Most people think of Major scales as being very “happy” sounding and minor scales more “sad” sounding.

The scale below is in 2 complete octaves, meaning, you’re playing the entire scale twice in a row. Pay special attention to that pinky extension up to the 5th fret. It can be a bit a of a stretch so take it slow.

Also played in 2 octaves, this scale covers all 6 strings. There are a few ways to approach this scale in the open position. I think the best way is to start on the root G and continue 2 octaves to the high G like this:

Notice I chose to play the 2nd B note on the open B string. Pentatonic scales are the basis for most blues and rock guitar solos. It’s a cool sounding and easy scale to memorize. E Blues Scale .
By adding just one note, we transform E minor pentatonic into a funky, bluesy, distinct sound.
E G A A# B D E 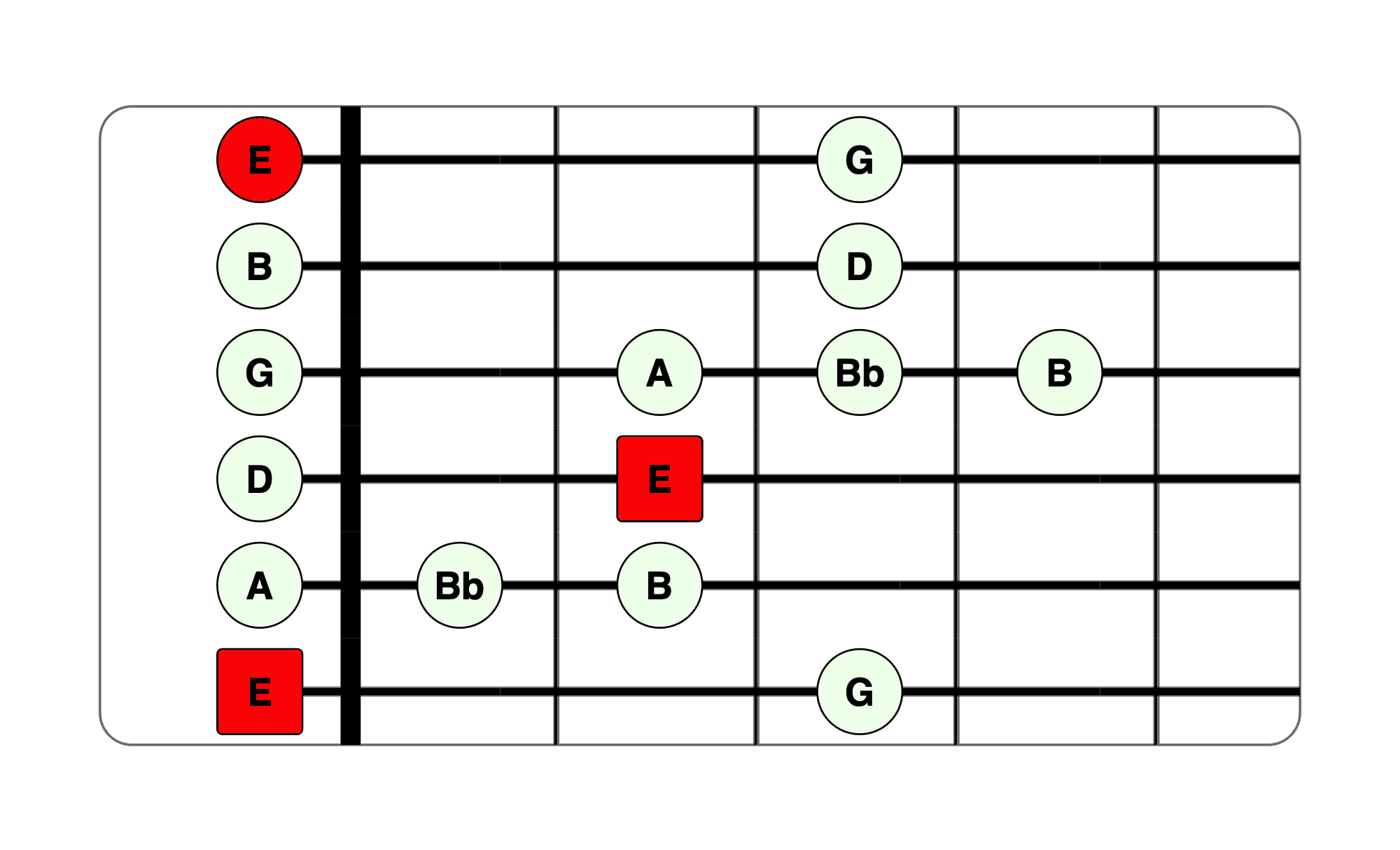 If you like the sound of these two scales, check out my in-depth free guitar lesson on pentatonic scales.

By raising the 7th note of the scale in E natural minor we get a really neat exotic, almost Spanish sounding scale:
E F# G A B C D# E Guitar Scales in the 2nd Position

Now lets move our left hand into the 2nd position. These closed (no open string) scale forms are the building blocks for soloing and improvisation. These shapes will get your technique in top form so you can move onto more difficult shapes and get them moving across the entire fretboard.

C Major 2nd position.
The same notes as the above C Major scale, but in a more common 4 fret spread. B minor, 2nd position
This particular minor shape is a cornerstone in every guitarists solo and improvisational toolbox. Hidden inside the shape are several major and minor chord and arpeggio forms. TIP –  Remember that you can move these closed shapes anywhere around the neck. Just pay attention to your root notes. For example if you take the G Major scale above and move it to the 5th fret root, it becomes A Major. If you move the root to the 7th fret it becomes B major. For myself and my students, I’ve always thought of scales as the best way to warm up both hands. For beginner guitarists a good starting point is to get 10 clean repeats ascending and descending of each form above.

If you’re feeling up to it, try introducing some alternate picking into it. Alternate down and up strokes through each scale, never playing the same stroke twice in a row.

Once you feel comfortable with these 10 forms, it’s time to move on to some more advanced forms and modes.
Modal Scales for Guitar, Theory and Workout.

As always, if you liked this lesson and haven’t joined my email list, jump on to get this stuff and other special offers and free lessons right to your inbox. Happy practicing! – Craig 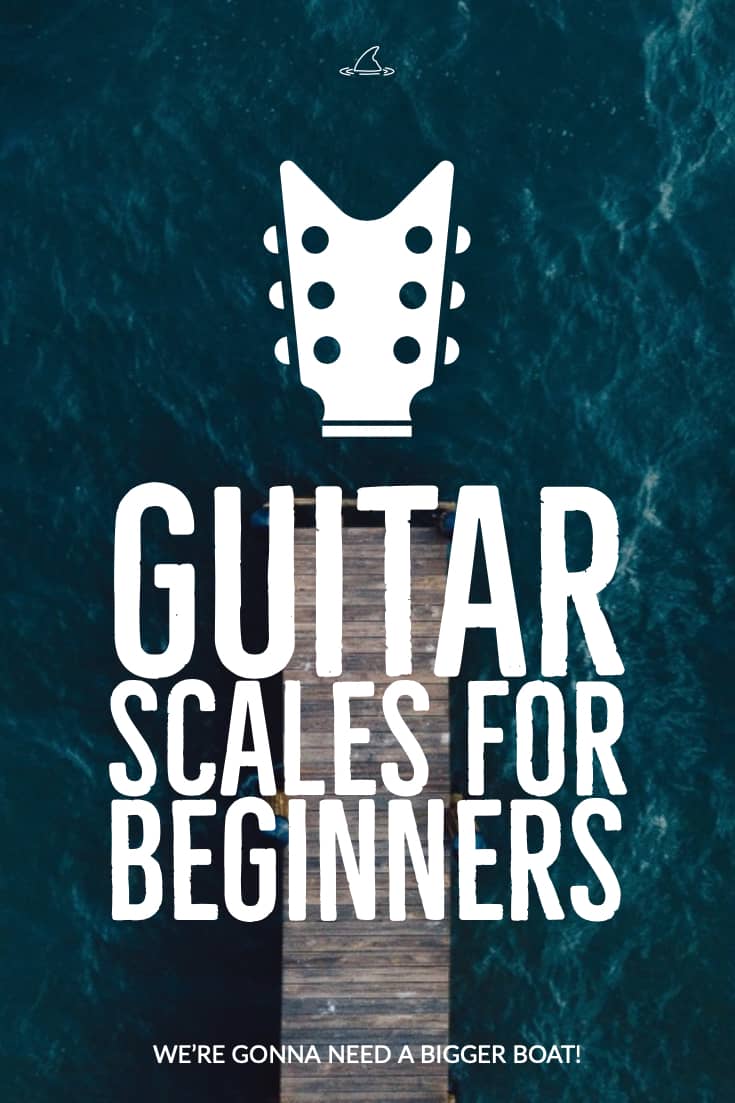