I met Jami recently on Pinterest and we became fast email guitar buddies. Jami has a wonderful gift for beautifully designed, easy to follow, visually appealing guitar lessons. I just love her website and her beautifully styled lessons are so different than mine, I just had to have her do a guest post here at Lifein12Keys.com. Hopefully it won’t be her last!
Enjoy – Craig Jami is a professional guitarist with Bachelor of Music in guitar performance.  She teaches guitar privately, in group classes and through her new website, modern guitar approach.  Jami also performs solo acoustic guitar and is the lead guitarist for the band the Mothers of Mayhem.

I took quite a few guitar pedagogy classes when I was in college studying guitar performance. One of the first classes I took explained the 3 main types of accompaniment methods on guitar and how to teach them to others. To accompany on the guitar means that you are playing the chords to a song while you or someone else sings the melody.

The three different types of guitar accompaniment are:

To show the three different types of accompaniment, I have included 3 different easy beginner songs.

A simple strum pattern is usually a combination of quarter notes and eighth notes played in a certain order over and over again each measure. To play a strum pattern, it’s helpful to know a few musical signs. The first is a down strum, which is used to strum down from the lowest sounding string (your 6th string) to the highest string (1st string) 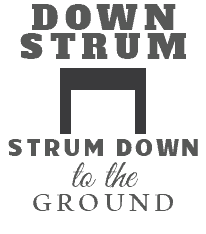 A down strum is used when you’re playing “on the down beat”. This means when you’re strumming on beat 1,2,3 or 4 (in 4/4 time). A strum pattern that uses all down beats would use quarter note strum bars and look like this:

When two strum bars are connected with a beam you get eighth notes and both are strummed in one beat. To do this, you strum down on the first one and up on the second. I’m going to use Brown Eyed Girl by Van Morrison to teach about strum patterns. The song I’ve included has two different strum pattern options. The first option uses a simple strum pattern that looks like this:

When you strum it, it should sound like you’re saying pie, apple, pie, pie. Here’s Brown Eyed Girl using this strum pattern: Alternating Bass is a guitar accompaniment style that is used in bluegrass, folk, country and is even found in other music styles here and there.  This is a great way to accompany a song because it almost sounds like you’ve brought a bass player along as well. I’m going to show this concept with Mammas Don’t Let Your Babies Grow Up To Be Cowboys. This song is in 3/4 time, which means you have 3 beats in a measure. When playing alternating bass in 3/4 time, you play a bass note and then strum for two beats and then play an alternating bass note and strum for two more beats (assuming you haven’t switched chords yet). I also added an eighth note strum pattern in to make the song a little more interesting to listen to. Pattern picking (also called fingerpicking accompaniment style) is when you hold a chord and then play the strings with your fingers (instead of a guitar pick) in a specific order and then repeat that order until the next chord.  It’s easiest to divide these patterns into three categories; 4-string, 5-string, and 6-string chords.

In order to play fingerstyle accompaniment patterns, you also need to know how to name your right hand fingers.  I use the traditional Spanish naming which is a common practice for most guitar music: To teach this concept, I’m going to use Landslide by Fleetwood Mac. This song only uses 5 string and 6 string chords.  Here are the patterns for both:

This song uses the D/F# chord. This is called a slash chord, or a chord over bass note. Here is a good explanation: Also, make sure you put that capo on the 3rd fret for this song! How to play the same song 3 ways

Let’s use the song Take Me Home, Country Roads by John Denver to further illustrate the concept of strum patterns, alternating bass & fingerpicking patterns. I picked this song because I’ve heard it played with all three accompaniment patterns in the past and they all sound great! It is also an easy song to work with because it uses beginner guitar chords. If you want the song to sound like the original, be sure to put your capo on the 2nd fret. Lastly, here is Country Roads using fingerstyle accompaniment. The pattern I’ve used is called Travis Picking Style. This style was made famous by Merle Travis. To play this style, you play two notes together for a quarter note on the first beat, and then play the rest of the pattern as eighth notes. Here is how the pattern looks broken down by how many strings you play for each chord. As always you can get a high quality FREE printable .PDF file of this lesson including all 5 Songs delivered right to your inbox.